Two very exciting things happened recently…Firstly I was given this beautiful pot full of scrummy raisins from my friend Dee 🙂 and secondly I finally found some PB2 powdered peanut butter! 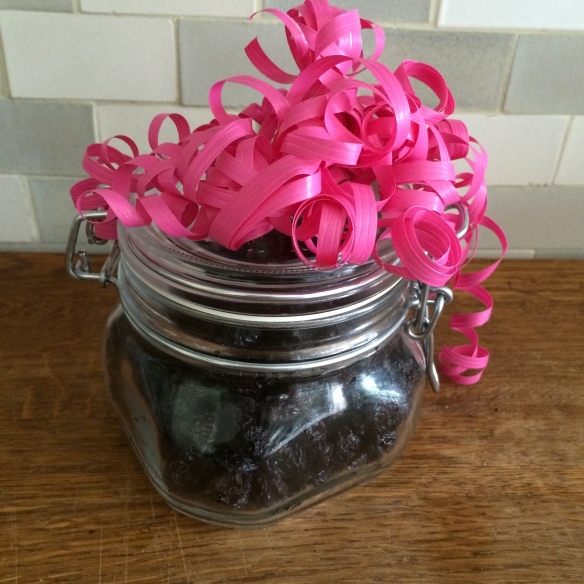 The raisins… well that’s a long (somewhat amusing) story which I won’t go in to here, but needless to say they were very gratefully received :). Now PB2….What on earth is that and why would I be so excited to find it? Well for a start it’s a powdered peanut butter which means it’s a great way to get peanut butter in to your baking (if you want to.. which I do!). As an added bonus it has 85% less calories from fat compared to traditional peanut butter, but it isn’t full of rubbish. It’s all natural, slow roasted peanuts which are then pressed to remove the fat and oil. It comes as natural and chocolate (yum!) and you can either just add water to make it in to a butter to use as you would normal peanut butter…. or you can use it as a powder in bakes and shakes!

So these two wonderful things were just crying out to be combined into something yummy…. and here it is! Peanut butter fruit and nut brownies! A great way to have a healthy treat with a little bit of a protein boost too!

You can change the fruit and add different nuts if you like but I wanted to really give that peanut punch so I stuck with peanuts! You can also use peanut butter if you don’t have PB2 but it will change the consistency so I suggest you go a little lighter on the oil.

Preheat the oven to 170C and grease a 20 x 20cm square baking pan with parchment paper.

Mix the ground almonds, flour, cacao powder,PB2, sugar, salt and bicarbonate of soda together in a large mixing bowl. In a separate bowl soak the chia seeds in the water. Once the chia seeds have absorbed all the water add them to the mix along with the vanilla extract, and oil. Whisk together using a hand mixer until well mixed. It should be thick and glossy when mixed. Have a taste – if you want a bit more peanutty flavour you can add a little more PB2 now but mix it in really well.

Stir in the peanuts, raisins and cherries (cut them in half if they are large). Pour in to the baking tin and place in the oven for 25 – 30 mins until a skewer inserted in the middle comes out clean.

Cool on a wire rack

Then prepare the topping. In separate bowls mix the original PB2 and chocolate PB2 with water. Add a little water at a time – you want a runny consistency but not too runny.  Drizzle the original one over the brownie, then the chocolate one. Pop in the fridge to set  – or just eat straight away! 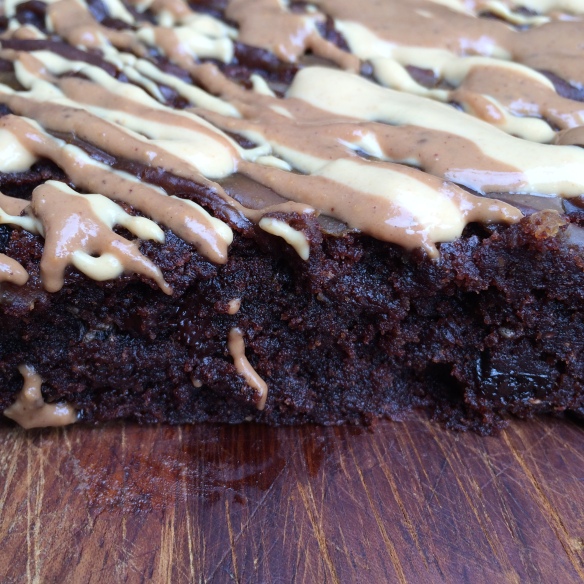 Error: Twitter did not respond. Please wait a few minutes and refresh this page.

With you every step of the way

Simple Gluten Free recipes for any time of day.

This WordPress.com site is the bee's knees